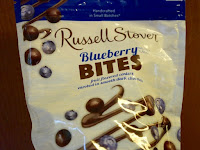 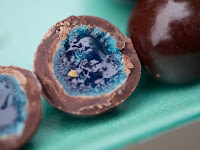 Welcome to Day #10 of Chocolate, Fruit and Botanicals Month.

This flavor was part of a family of new "Everyday Chocolates" that the company announced this past year that included Bites, Sugar Free Bites, Bark, Pretzels and other confections.

Russell and Clara Stover began their chocolate company in the early 1920s in Denver, Colorado. The company later evolved and moved to Missouri. In 2014, Lindt and Sprungli bought Russell Stover Candies.
Posted by Corinne DeBra at 10:40 PM No comments: 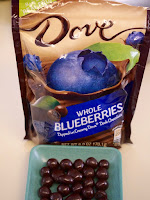 Welcome to Chocolate, Fruit and Botanicals Month. This week I'm featuring another item in a series of blueberry chocolates.

Blueberries and chocolate have become known as good sources of antioxidants; so it's no surprise that companies are creating confections with both of these sweet, flavorful ingredients.

Although today's Dove blueberries contained lactose, corn syrup and artificial flavors, which I could have done without. And yet, I still managed to enjoy 1/2 package with no trouble whatsoever.
Posted by Corinne DeBra at 8:19 AM No comments: 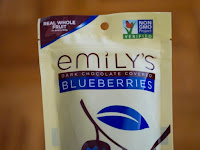 Welcome to Day #13 of Chocolate, Fruit and Botanicals Month.

Emily's Dark Chocolate Covered Blueberries were not bad for chocolate-covered fruit pieces. Made with Non GMO dark chocolate, these whole, dried blueberries tasted like real berries and contained no artificial flavors or colors.

The blueberries were sweetened, but didn't taste loaded with sugar—a good thing if you like tasting the fruit and the chocolate.

These berries were convenient to take along on a hike. (And, yes, chocolate and hiking are just as wonderful with a broken hand.)

The Emily's brand is "looked after by" AMES International, Inc. (Fife, WA).
Posted by Corinne DeBra at 8:17 AM No comments: 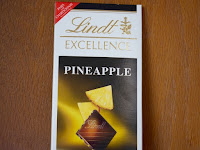 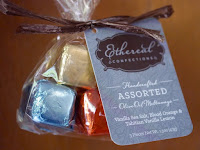 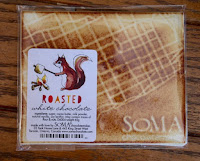 I was intrigued by my first taste of ambrosia fruit salad, by the combination of pineapple pieces, mandarin oranges, coconut flakes, diced marshmallows, sour cream and occasionally pecans or cherries. 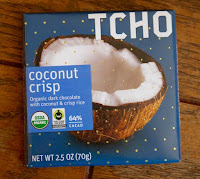 Today's dark (47%) chocolate Pineapple bar from Lindt and Sprungli AG (Kilchberg, Switzerland), had a fruity aroma and contained small pieces of pineapple and flecks of hazelnut. (Pairing suggestion on the label for this bar: a Chardonnay white wine.)

I enjoyed alternating bites of complementary fruit flavors. Bon appetit to all.

Posted by Corinne DeBra at 8:11 AM No comments: 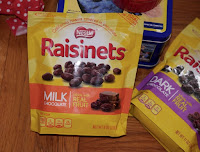 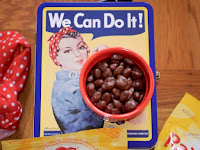 Welcome to Day #6 of Chocolate, Fruit and Botanicals Month.

Today I attended an event that was honoring women who joined the workforce during wartime (in World War II). These so-called Rosie the Riveters helped weld and assemble ships that were being launched in the San Francisco Bay Area (and elsewhere) in rapid succession, to help fight the war overseas during the 1940s. 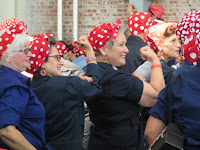 In keeping with that era, I chose to feature Milk Chocolate Raisinets, a confection that may have been familiar to the "Rosies." Chocolate covered raisins have a long history, and were likely available in the U.S. at least a decade before World War II started, from the Blumenthal Chocolate Company and some European companies.

These chocolate and raisin pieces had an almost malty sweetness to them.

Posted by Corinne DeBra at 7:59 AM No comments: