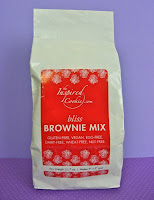 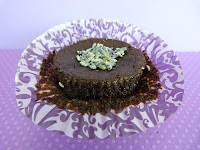 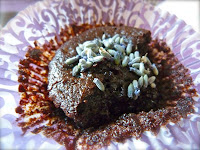 Today I chose a "local" chocolate and lavender combination, by preparing a gluten-free bliss Brownie Mix from The Inspired Cookie (mix was made in S. San Francisco, CA), and plucking some lavender from my own yard to make lavender brownies. I made both lavender brownie cupcakes and pan brownies. Both were good, and were even better topped with lavender buds.

This brownie mix was gluten-free, vegan, egg-free, and dairy-free; and I prepared it with vegetable oil and applesauce, as directed. Homemade applesauce seemed to work just fine. The brownies were a bit on the oily side; I might try adding a bit less oil next time, but were nice and moist. (I also added some Lavender Jelly from Tumalo Farms (Tumalo, OR), which I will feature again tomorrow.)

Today was Day #6 of Chocolate and Lavender Theme Week.
Posted by Corinne DeBra at 9:59 AM No comments: