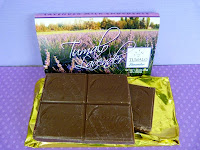 Purchased from: Tumalo Lavender, Tumalo, OR

Today was Day #5 of Chocolate and Lavender Theme Week.

Lavandula (more commonly known as lavender) -- a group flowering plants, made up of 39 species, and part of the very large mint family -- has been cultivated for many centuries, for gardens, cooking and scented oils. Lavender blooms in summer, but I also enjoy its soothing, floral smell in the winter. (Try a pot of water with lavender buds on the stove, on a low heat setting for an hour or two, being careful to add more water if it evaporates too quickly. Much better than artificial air fresheners.)

I once associated lavender with Provence in Southern France -- fields bursting with purple rows of French lavender; and I thought lavender was limited to areas with a Mediterranean climate, such as California. In fact, there are species grown around the world. (Given my love for lavender, it's hard to believe that this plant with the fragrant purple flowers is considered a weed in parts of Spain and Australia.)

I later learned of other varieties being grown in cooler areas. This purple flower can grow in the U.K. (Lavanda angustifolia, or English Lavender), and in the United States in cool mountainous areas of the Northwest. Tumalo Farms (Tumalo, OR) near the town of Bend, Oregon, has cultivated (and sells) lavender that can grow near the slopes of the Cascade Mountains (Zone 5), where it snows in the winter.

Tumalo Farms organic lavender oil is incorporated into many of the company's offerings. Today's Tumalo Farms Lavender Milk Chocolate bar (a seasonal item) was very pleasantly scented with this oil. In fact, I think my favorite part of this 33% cocoa milk chocolate bar was the lavender. Thank you to Gordon, at Tumalo, for sending one of the few bars left from this past year's summer harvest. I'll have to wait try the dark chocolate version of this bar until next year; but I look forward to featuring Tumalo lavender jelly (in combination with chocolate) tomorrow.

Posted by Corinne DeBra at 12:45 PM No comments: 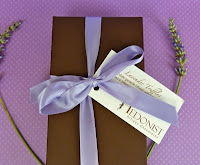 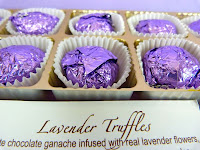 Today was Day #4 of Chocolate and Lavender Theme Week.

In centuries past, flowers (such as lavender, violets and roses) were more commonly used to flavor and decorate edibles. I'm happy to see them making a cuisine comeback. I love the taste of lavender, and incorporating lavender flower buds into desserts and other dishes. So, no surprise that I liked these Lavender Truffles from Hedonist Artisan Chocolates (Rochester, NY).

The sweet, white chocolate, lavender infused ganache (centers) were enrobed in bittersweet chocolate and cocoa powder. The box of 10 Lavender Truffles -- individually wrapped in purple foil -- was tied up with a pretty purple ribbon.

Posted by Corinne DeBra at 1:16 AM No comments: