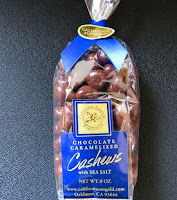 Welcome to Day #12 of Chocolate and Cashew Theme Week. 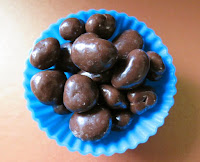 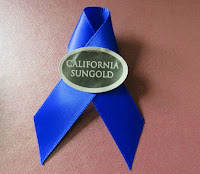 I couldn't really taste the chocolate or the cashew (a very mild flavored nut to begin with), as the sugar level of the caramelization was quite high—even with a hint of sea salt that helped balance the sugar.

These would be great if you were craving a toffee or sweet snack with slightly layered texture and flavor.

There is a different "Goldilocks" chocolate for each of us. What's too sweet for me as an adult, might be just right for someone else.

Posted by Corinne DeBra at 9:20 PM No comments: 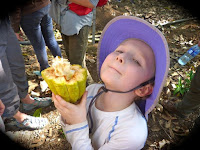 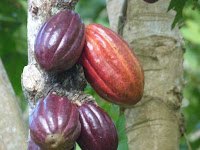 But a close second might be a chocolate field trip to Central America, to see how cacao seedlings transform themselves into ripe cacao pods, full of tasty fruit pulp and seeds (cacao beans). The beans are harvested, fermented and eventually turned into chocolate.

Last month, I was part of a guided tour* to a handful of cacao farms outside Matagalpa, Nicaragua. 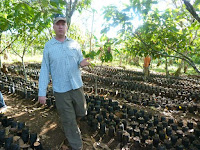 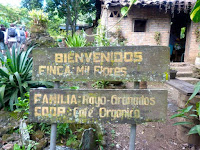 Our guides were Jose Enrique Herrera and Gifford (Giff) Laube, of Cacao Bisiesto. This knowledgable duo has been working directly with cacao farmers to produce premium cacao from independent farms in the highlands of Nicaragua. Both founders bring valuable experience to the partnership. 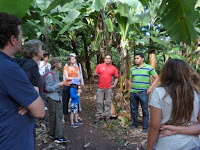 Giff was originally from the U.S., and worked for a chocolate company previously. Jose Enrique had in-depth experience with the local area and was trained as an agronomist.

Together they advise farmers on how to prune and cultivate cacao trees for the best output, and help shepherd beans through a careful (and customized) fermentation and drying process—necessary before beans are sold to chocolate makers—such as French Broad Chocolates in Asheville, NC, who was profiled yesterday. 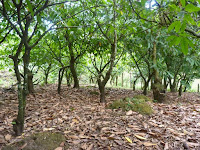 Our first stop on the farm tour was a coffee farm (Finca Mil Flores, Cafe Organico), where cacao trees were also grown; and here we had our first taste of fresh cacao fruit (pulp around the seeds). A few quick expert machete chops and the open pod was passed around for inspection and tasting.**

Also, most farmers in the area were growing cacao as a secondary (or tertiary) crop—after, e.g. coffee, bananas, sugar cane, and/or cattle ranching, Giff explained to us. 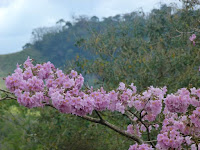 Why is proper pruning important? In part to keep diseases in check, which affects output as well. We also stopped at a farm with mature cacao trees that were slightly larger, that had not been so tightly manicured. Walking under the cacao tree canopy was beautiful; but the pod health and harvest apparently was less robust. 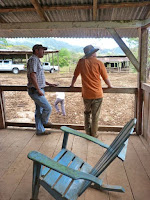 Our next to last stop was an operation known as Henry's Farm, that was also a good-sized cattle ranch that lay at the end of a long dirt road.

In addition to diseases there are some natural crop predators. We saw no traces of the "dreaded" native gray and white squirrels (ardillas). Squirrels are known to chew through pods (as are woodpeckers and various rodents). But we did spot other more benign wildlife.

We hiked up a packed dirt track to take a look at their cacao trees and seedlings, being careful not to tread on a line of leaf-cutter ants. The ants were almost too small to see, but we could see a slow-moving tiny parade of green leaf pieces moving underfoot, seemingly under their own steam, across the forest floor. And cicadas sang in the trees in the hot, summer weather.

Trees were in bloom with purple-pink flowers across a mountain valley.

Another cacao pod was picked, opened, and passed around. The pulp was sweet, fruity and wonderful, and the flavor(s) were slightly different at each farm we visited. (What did it taste like? Citrus, floral, watermelon...all of the above.)

We had lunch in a spacious old white barn, and sampled several craft chocolate bars made from Nicaraguan cacao.

Our last stop of the day was Cacao Bisiesto.

Cacao Bisieto takes in beans from farmers and operates fermentation and drying facilities where beans go through initial stages of processing and developing flavor before being shipped to chocolate makers in the U.S. and elsewhere. 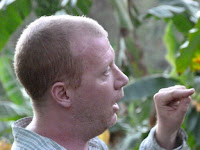 We stopped at the fermentation and drying areas. Here is where additional expertise was came into play.

Each batch of farmer's beans were checked and assessed for fermentation profiles. Fermenting beans were carefully monitored and moved from box to box during the process over a period of days. Cut tests were done on selected beans. Near these "vats," the aroma was similar to a winery. 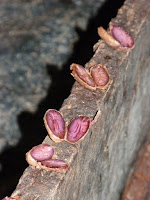 After fermentation, batches of beans were dried on screens in elevated wooden frames, that allowed for just the right amount of air to circulate. Plastic sheeting around the area helped prevent contamination or moisture from wind or rain. 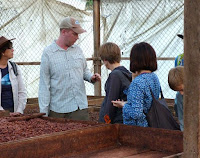 As the sun was setting, our group made our way through carefully planted and tended rows of cacao trees; and Giff explained to us techniques they were using on their own farm. Although it was hard to hear what Giff was saying, as a symphony of cicadas were broadcasting at full blast around us. (The sign of a healthy ecosystem one might say.)

It was a full and educational day, and great to see and hear first-hand the how a few organizations and individuals can add lots of value in the supply chain, as cacao moves from tree to bar.

Thank you to both Giff and Jose Enrique for their time and patience during the tour, when they were peppered with questions from myself and others.

*The group tour was organized by The Chocolate Garage (Palo Alto, CA).

**Yes the seeds/beans are a bit bitter and astringent in their raw state, but you can suck the pulp off them and they're just fine that way.

Posted by Corinne DeBra at 9:19 PM No comments: