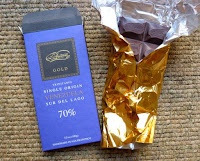 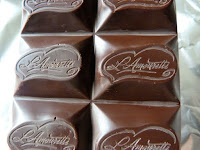 Today was Day #5 of Chocolate and Venezuela Theme Week.

Venezuela has a reputation for producing cacao with rich aroma and flavors. It's also a country rich in origin stories.

Cacao originated in the Americas, and later was brought to Africa, Southeast Asia and other countries located within 10-20 degrees of the Equator for cultivation.

When chocolate historians speculate about where, specifically, cacao trees originated in the Americas, the discussion generally focuses around an area stretching between Eastern Venezuela to Southern Belize.

For that reason, I look forward to featuring chocolates from the "cradle" countries, such as Venezuela.

Today's Trinitario Single Origin Venezuela Sur del Lago* 70% cacao bar was part of L'Amourette Chocolatier's "Gold" series of single origin bars. L'Amourette is based in, and makes their bars in, San Francisco, CA. And an intriguing origin story for the Sur del Lago cacao they used to craft this bar was printed on the back of the bar's packaging**.

This bar had a slight chocolatey aroma, and a rich earthy flavor. It was soy and gluten free, and vegan.

*Sur del Lago de Maracaibo, or Sur del Lago for short, refers to an area south of Lake Maracaibo, the largest lake in the South American continent. This large, brackish estuary or bay is not unlike San Francisco Bay in terms of its importance to agriculture and commerce in the region and the country as a whole. However, in addition to being warmer and more tropical, it also has regular, rather spectacular lightning storms, something we rarely see in San Francisco.

**The cacao beans for this bar were grown "within walking distance of Lake Maracaibo...the famous lake where Captain Blood and his pirate ship the Arabella with all of its booty eluded capture by his nemesis, Don Miguel Espinosa."

Posted by Corinne DeBra at 9:44 AM No comments: