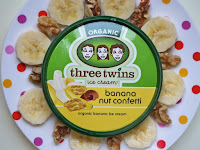 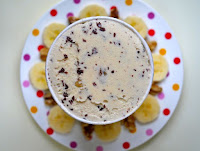 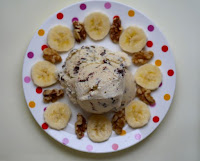 The Banana Nut Confetti ice cream was a little lighter than the caramelized banana chip gelato from yesterday, but just as enjoyable. And who doesn't like some relatively healthy ice cream with chocolate confetti* on a gray winter day? Count me in. The specks of confetti allow for more chocolate flavor accessibility (than larger, frozen chunks of chocolate).

Tiny bits of walnut rounded out the flavors nicely; nuts often helps balance out the sweetness of fruit and sugar and add some texture and richness.

Today was Day #8 of Chocolate and Banana Theme Week.