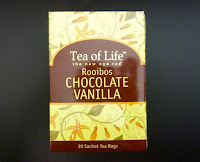 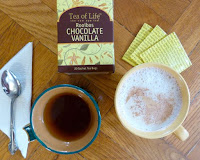 Today was Day #4 of Chocolate Tea and Beverage Theme Weeks.

Yesterday I had a rooibos* chocolate tea (from Cup of Life). That tea had cinnamon and banana pieces in it. Today's (very similar) Rooibos Chocolate Vanilla Tea from Tea of Life (imported from Sri Lanka) omitted the banana, and was flavored with roasted cocoa pieces, cinnamon pieces, and vanilla pods.

The tea by itself was interesting, but despite the rich mahogany color, it seemed to need a bit more oomph. Adding warm milk to this tea and a dash of cinnamon and cocoa worked fairly well.

*Rooibos (also known as "redbush" or bush tea) is a naturally caffeine-free alternative to black and green tea, made from the leaves and stems from a South African bush.
Posted by Corinne DeBra at 10:48 PM No comments: