***Chocolate: A Delicious Muse for the Visual Arts

Since images of cacao started to appear on Mayan structures and stone sculptures, there have been creative homages to chocolate. This page contains examples of my chocolate art, chocsimiles (chocolate facsimiles/replicas of items), and chocolate-related works from other artists that have inspired and interested me. (See other pages for chocolate-inspired media: movies, television, books and music.) 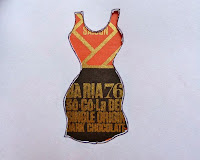 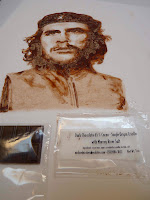 This "Chocolate Che" portrait is my small tribute to artist and photographer, Vik Muniz, who has created various works of art with food (chocolate syrup, beans, peanut butter and jelly), and other materials. He then photographs these pieces. Muniz's similar (larger) portrait of Che Guevara is rendered in what looks to be cooked beans.

I melted some dark chocolate shown (bottom left) and "painted" this picture (with a small brush, my fingers, and a toothpick).

An animated short, in which I poke fun at my pursuit of chocolate.
http://www.xtranormal.com/watch/6728853/
(Unfortunately, this xtranormal video no longer works.)

2,000 chocolates
The world is alive with
Creativity

Chocolate Art: Around the Globe

Below is a partial list of works inspired by, made from, or otherwise creatively rendered in chocolate. 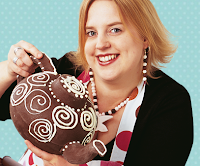 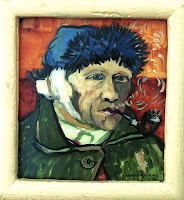 2011 - Pennsylvania artist and painter, Jean Zaun, creates chocsimiles of famous paintings, and commissioned portraits. A story and photos of her works appeared in the U.K. publication the Daily Mail (Mail Online - Jan. 2, 2011).

2010 - Food artists create large Christmas tree, made of 12,000 Ferrero Rocher chocolates, in London.  Click here to view a (Nov. 2010) video story on YouTube. (Still photo at right is from this video.)

2010 - Liudmila and Nelson, create concept art for a chocolate marketing stand, with chocolate bars wrapped in images taken from their Cuban countryside series of photos. The images capture some unique revolutionary billboard art.

2010 - Miniature chocolate versions of the terracotta warriors of Emperor Qingshihuang were on display at the World Chocolate Dream Park inside the Beijing Olympic Park, in Beijing, according to a Jan. 14, 2010 news story. Also present: chocsimiles of the Great Wall and a traditional Chinese panoramic painting. (Xinhua) 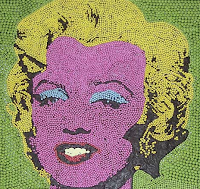 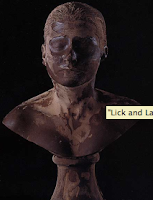 1993 - Artist Janine Antoni made a bust of herself from 35 pounds of chocolate (and another bust out of soap) as part of her "Lick and Lather" series. (Image at right is from Art21 PBS slideshow.)

1970 - Ed Ruscha created Chocolate Room, an installation for the 35th Venice Biennale, using Nestle's chocolate -- silk screened onto 360 sheets of paper and hung on the gallery walls. Chocolate Room was recreated in 1995 for conceptual art exhibition "Reconsidering the Object of Art" at the Museum of Contemporary Art (MoCA), Los Angeles, and again in 1999 for the exhibition "Edward Ruscha Editions 1959-1999" at the Walker Art Center. In 2003, MoCA purchased the work.