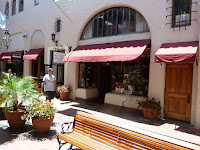 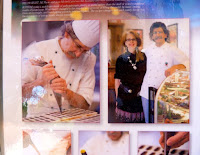 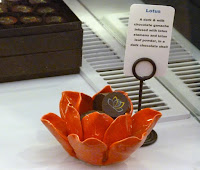 Last week I visited this beautiful, coastal city where I'd lived for 4 + years earlier in life. Why I ever left is harder to fathom now (the world of work and adventure called). However, why I return there is no mystery. The scenery alone is worth it. And, of course, between the towering blue and beige mountains and the Pacific Ocean in Santa Barbara, there is chocolate.

Chocolats du CaliBressan (Santa Barbara and Carpinteria, CA) has two locations, and is run by a French couple. Jean-Michel Carre calls himself the "French Chocolatier of the American Riviera." The downtown Santa Barbara location is right off State Street, tucked away next to a few other small independent shops, near a fountain with turtles sunning themselves. 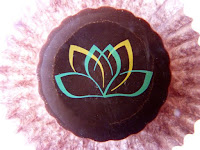 Today's Lotus bonbons were attractively displayed in a red lotus bowl in the shop, and this piece was part of an assortment box I purchased. It was filled with a creamy, soft (dark + milk) chocolate ganache infused with lotus stamens and lotus leaf powder; covered in dark chocolate; and adorned with a lotus flower stencil.

The lotus flavor was so subtle that it was difficult to detect, but I enjoyed the thought that I was taking in some part of this flower. 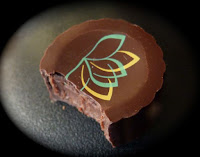 Today was Day #1 of Chocolate and Santa Barbara Theme Week.

Posted by Corinne DeBra at 10:52 AM No comments: 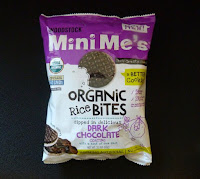 Today was Day #7 of Chocolate, Grains and Grasses Theme Week, with a focus on alternatives to wheat.

Rice was my first go to wheat substitute when I learned I had issues with gluten many years ago. And while rice cakes didn't seem as exciting as a "real" cake initially, I quickly got used to them. Rice cakes are, however, can be more interesting with a thin dark chocolate coating on top -- just like today's Mini Me's Organic Rice Bites -- a product of the Netherlands and distributed by Woodstock foods (Providence, RI).

These organic, diminutive rounds (billed as a "better cookie" and designed with children in mind) were gluten-free and were "produced with No GMOs." I appreciated the smaller, 3-bite size pieces.

The dark chocolate complemented the rice, and a light touch of sea salt tied everything together nicely.

Posted by Corinne DeBra at 2:05 AM No comments: