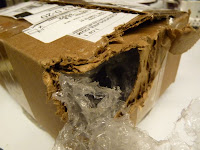 Today was filled with pesky adversities. Among them: cold, stormy weather and the chocolate originally planned for today was stolen by a squirrel. 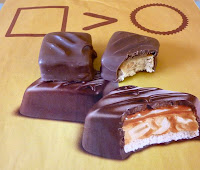 The first time I was burgled by this squirrel I was annoyed but amused. The squirrel nibbled through a cardboard box that was left on my doorstep, and made off with a few pieces from one corner of a high-end chocolate assortment box. This time, the squirrel stole the entire shipment. I was left with an empty shipping box -- with a large hole in it (pictured), chewed up bubble wrap, a small colorful twist-tie, and a comment card with a gnawed off corner (the squirrel's signature, the rodent equivalent of the mark of Zorro). This means war...

Fortunately, when it comes to emergencies I'm well prepared. I have extra water, two LED headlamps, a solar cooker, first aid kit, etc., in case of an earthquake. And I have a chocolate vault. I dug into the vault and found a new item for today. So, let's get back to talking about chocolate.

Today I tried Mars Snickers Peanut Butter Squared bar with two squares packaged in one wrapper. See 3D (actual squares) vs. 2D image (magazine advertisement) versions. Maybe it was the lactose, hydrogenated oil, and corn syrup, but I didn't feel especially great after eating these two squares. This bar could also have been on the shelf too long before I bought and ate it. It's also hard to beat the original Snickers bar recipe. The ad seemed to indicate that these squares are better than circles that look like Reese's Peanut Butter cup shapes. Unfortunately, I'm not so sure I agree.

Today was Day #1 of Chocolate and Nuts Theme Week.

Posted by Corinne DeBra at 3:23 PM No comments: