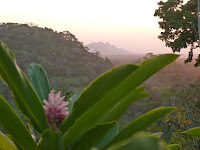 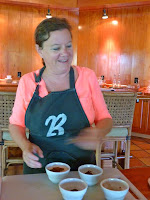 Belcampo Lodge is nestled in a lush jungle, in the Toledo District of southern Belize. The Toledo region is to cacao in Belize what Napa is to wine in California. Belcampo (also with locations in Northern California and Uruguay) is ramping up chocolate (and coffee and rum) production as part of a new Agritourism center at their site in Belize. 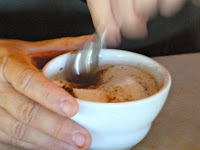 The chocolate for this week's Mayan Chocolate Pudding (flavored with a touch of spice and heat) was made with the first batch of chocolate created in the "chocolate building" in this new Agritourism center. (Two other buildings in this complex will be devoted to coffee and rum.)

Mara developed the recipe for Mayan Chocolate Pudding and gave a demo of how to prepare her popular dessert, with help of staff, in the afternoon; and the finished, creamy, mousse-like pudding was served as part of the dinner menu.

Being in the jungle, does not mean doing without, especially at Belcampo, which is also part farm -- where one can obtain fresh eggs (from resident chickens); gaze at thousands of cacao trees under cultivation (for chocolate making); tour a garden area with a few spices; and in the very near future, see fields of sugar cane (primarily for rum production). 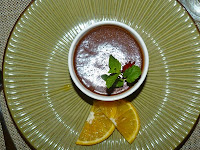 It was a treat to be at Belcampo to see the first batch of chocolate being created with new equipment in the chocolate building. Expect to see a few new chocolates and desserts available soon at Belcampo Lodge.

Note: Posts and photos will be delayed due to travel. However, the chocolate eating will continue.
Posted by Corinne DeBra at 9:03 PM No comments: