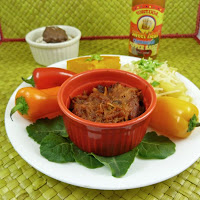 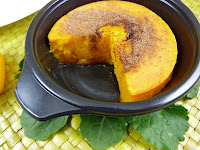 Umami, Caribbean Style
Tortuga means tortoise or turtle, and also refers to at least three different Caribbean islands -- some tinged with legends of pirates. It is also the name of a company, Tortuga Rum Company (Grand Cayman, B.W.I.), creator of the three sweet and spicy offerings I incorporated in today's dinner and dessert(s).

After enjoying some smoky, barbequed pulled pork with Tortuga Sweet Heat Caribbean sauce, sweet peppers and pasta, and a butternut squash souffle lightly dusted with savory cocoa, it was time for dessert.

Tortuga Chocolate Rum Turtles with Sea Salt were made with pecans, caramel (corn syrup, butter and cream) and Jamaican rum flavor. Even a little real butter improves the taste of a caramel center like this. Each sweet, softly chewy chocolate turtle (so named for it's turtle-like shape) was decorated with a sprinkle of coarsely ground sea salt crystals.

This same milk chocolate coated turtle became the subject of another dessert: "Turtle on a Beach." And, I used Tortuga's Pepper Jelly as a cheesecake topping. (See below for more on both desserts.)

Turtle on the Beach 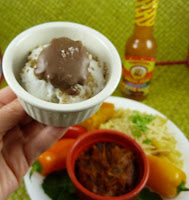 The following recipe is for individual cheesecakes with a colorful, kick. This slightly less sweet (gluten-free) cheesecake is flavored with white truffle oil, and covered with a light layer of sweet, and spicy-hot, Tortuga Gourmet Pepper Jelly. 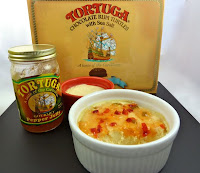 Let cream cheese soften at room temperature for an hour before placing in a bowl to make it easier to blend with other ingredients.

Pre-heat oven to 350 degrees Farenheit, and place a baking pan with 1/4 inch water in oven.

Put softened cream cheese in a bowl. Gradually blend cream cheese (with an electric mixer, or immersion blender), until fluffy, then add sugar, egg, creme fraiche, sour cream, flour and truffle oil, just until all ingredients are fully incorporated. (Set pepper jelly aside for use after cheesecake is baked and cooled.)

Spoon into ramekins or small souffle dishes. Makes 6-8 individual cheesecakes in ramekins -- depending on size of dishes used. (To make a full-size, 10-inch cheesecake, double this recipe (except eggs -- use 2 larger eggs); and grease springform pan before filling with cheesecake batter.)

Bake in 350 degree oven for 30 min., then reduce to 325 degrees, and cook until firm in middle(s), about 25 more minutes until slightly firm. Do not overcook. Turn off oven, but leave oven door open.
Let cheesecake cool in oven for an hour, then refrigerate for several hours or overnight.

Spoon over pepper jelly across top of individual cheesecakes (amount depending on taste) and refrigerate, or serve the cheesecakes.

Posted by Corinne DeBra at 11:56 PM No comments: