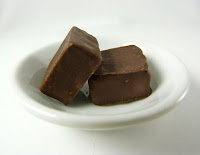 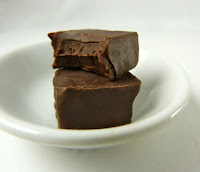 Today was Day #1 of Chocolate and Ecuador Theme Week.

The team at SOMA also produces a series of single origin truffles, including today's Ecuador square(s) -- made with "chocolate from the farm of Camino Verde," in Balao (a region with a long cacao-growing history), in Guayas province, in southern Ecuador.

Tasting notes for this truffle were: "baked brownies, toast and honey." This description sounded good to me. The two pieces that I ate this evening were full of creamy flavor, and did have almost a honey-like sweetness.

An added plus -- SOMA also makes their chocolates without extra preservatives or additives that might mask flavor notes specific to a given region in Ecuador.

Ecuador has a long history of growing cacao, stretching back for thousands of years, and this equatorial country is one of the top 10 cocoa producing countries in the world, usually coming in at number 7 or 8 on this list. (The top five countries are Ivory Coast, Ghana, Indonesia, Nigeria and Cameroon.)

According to a Gain (USDA) report in February 2015, "Ecuador's cocoa bean production is estimated to reach 255,000 metric tons (MT) in calendar year 2015 (up over six percent over 2014)..." Whereas competition for agricultural land in other South American counties (e.g. Peru) has caused estimates in neighboring countries to drop. Ecuador has been doing well when it comes to cacao.

Most of the cacao from the African countries mentioned above is going to large chocolate makers. However, cacao from Ecuador is being used by large companies as well as a dozens of small and medium sized artisan chocolate makers. Ecuador is known for its Arriba Nacional cacao beans, considered to be "fine flavor" cacao, with fruity and floral aromas.

However, an increasing percentage of cacao (up to half, by some estimates) is coming from a new, productive disease-resistant strain of cacao called CCN-51.

Disease-Resistance and CCN-51 in Ecuador

Like many other types of farmers, cacao growers face many challenges in raising cacao, including diseases that may affect their crops. For example, a disease called "Witches Broom" turns plump, healthy, mini football-shaped, cacao fruits into shriveled dark pods. Another disease, "Mal de Machete," creates a wilted harvest.

In larger plantations where large numbers of trees are planted more closely together, they may also be more vulnerable to disease. A discouraging possibility if you're a farmer making your livelihood from cacao, or a consumer/chocolatier that's affected by scarcity or higher prices down the line.

In the 1900s, a new strain of cacao tree called Coleccion Castro Naranjal (CCN)-51 was developed by a man named Homero Castro, in Ecuador.  It was so named because it supposedly took 51 attempts to cross-breed and create this new strain of more disease-resistant tree.

Cacao from the original CCN-51 thrived, but didn't taste great. However, improvements were made in fermentation and other techniques, and objectionable flavor notes were coaxed out. CCN-51 is now used in blends with other cacao (in Ecuador and other countries), especially by larger companies that are seeking to provide a smooth, consistent flavor across a high-volume production run.

Many artisan makers have stuck with the more "fragile" heritage strains of cacao that provide superior flavor. One can hope that the more delicate Criollo and other strains will always be there. But, this would not be the first time that a sturdier hybrids triumphed over a more fragile, flavorful or aromatic variety when it came to plant breeding. Similar stories have developed around grapes, roses and other crops.

Now, on to Chocolate and Ecuador Theme Week, and single origin chocolates and bars from Ecuador...

Posted by Corinne DeBra at 11:06 PM No comments: