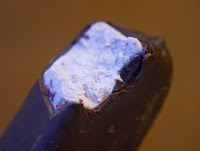 The name Cherry Garcia (a riff on musician Jerry Garcia, of The Grateful Dead) was inspired by a customer suggestion. Ben and Jerry's Cherry Garcia ice cream was first released in February 1987, almost nine years after the company was founded.*

The original Cherry Garcia ice cream had a base of vanilla ice cream (Ben and Jerry's first flavor) with whole Bing cherries and smaller than usual chunks of chocolate, according to a press release.

Over the years* the base ice cream for this popular flavor became cherry ice cream instead of vanilla, and the pieces of cherry became smaller.

It's challenging to create an ice cream bar without modifying some ingredients. However, some changes are more noticeable than others. For example, for the first few bites, I saw no cherry pieces. Later, I did run into a few. (Note: I've not tried Cherry Garcia Ice Cream in many years, and the whole brand and formula has likely changed in the past decade.)

On the positive side, this tasting experience inspired me to make some homemade ice cream with a great vanilla base, whole bing cherries and small high-quality dark chocolate shavings. Back to the future. Thank you to Ben and Jerry for the original inspiration.

*Ben and Jerry's co-founders, Ben Cohen and Jerry Greenfield, opened their business in May 1978 in a renovated gas station in Vermont. In April 2000, Ben and Jerry's was acquired by the Anglo-Dutch food giant, Unilever (London, UK), the company that also owns Breyer's and Good Humor ice cream brands.

I had dinner w/ your mom, dad, & your younger sister yesterday. They told me to check out your blog.

It was great to see them again!