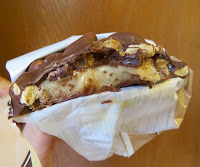 The Maple Bun confection was from the Pearson Candy Company (Saint Paul, MN), a company that's been in business since 1909 and has seen its share of candy bar trends.*

This candy bar was shaped like a patty or bun rather than a uniform, rectangular bar, making it look homemade. It contained more chocolate and peanuts than expected. The layer of sweet nougat-y filling was slightly less dominant than imagined (a good thing).

The maple flavor was subtle and relatively natural tasting.

Rather than broken nut pieces, the Virginia peanuts in this bar maintained a sense of integrity and added a satisfying crunchy texture.

*Candy Bar History Trivia: Between WWI and WWII, hundreds, perhaps thousands, of candy bars debuted. One of most interesting was the "Chicken Dinner" candy bar that hit the market in 1923. (It contained peanuts, but no chicken.) Pearson's acquired Sperry, the candy bar maker behind the Chicken Dinner bar. I would have included this Pearson Candy Company bar today. However, Pearson discontinued the Chicken Dinner bar in the early 1960s.