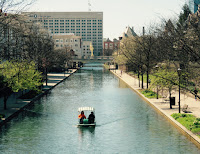 I recently spent a week in Indianapolis, Indiana. As often happens, there were many more new chocolates to discover than days spent there. This post is a re-cap of Chocolate and Indiana Theme Week with some important extras.

Many chocolates and chocolate-related places were spotted or enjoyed from/on the Indy Cultural Trail, an 8-mile trail that runs through Indianapolis*. This bicycle and pedestrian trail connects five cultural districts, runs by the canal area, and joins with other trails, including the Monon trail extending to the north. I've included some chocolate trail highlights below.

Downtown Indianapolis
Located at the south side of the centrally located Soldiers and Sailors Memorial, The South Bend Chocolate Company Chocolate Cafe contained a variety of chocolates, confections and a selection of ice creams and coffee in the back. 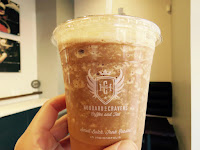 And a few blocks from there, stop in at Hubbard and Cravens Coffee and Tea for a few of their cocoa-based beverages. The company's "Healthy Elephant" cold drink with cocoa and almond milk was a great-tasting, refreshing pick me up on a warm day after lots of walking.

The Industrial Center is home of the not-to-be-missed Lick Ice Cream. While I did not taste their chocolate ice cream flavors, their Cedar and Whiskey ice cream was a trip highlight.

Massachusetts Avenue, aka Mass Ave
Along the diagonal avenue known simply as Mass Ave, there are several interesting food and drink stops. 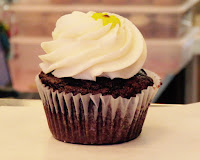 I visited The Best Chocolate in Town (on upper Mass Ave, and featured this past week); Natural Born Juicers (offering several juice blend options with cacao); and The Flying Cupcake—where I enjoyed a tasty chocolate gluten-free cupcake with buttercream icing piled high on top, and enjoyed chatting with a helpful young woman behind the counter. (Happily, there are many gluten-free options in Indianapolis.)

Even the popular Bru Burger Bar on Mass Ave had a dedicated gluten free menu with a chocolate dessert. 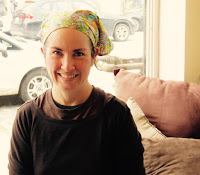 I walked down to the SE end of the Cultural Trail to Fountain Square hoping to speak with Suzanne Litteral, of Litterally Divine Chocolates. Fortunately, I found her. She was hard at work preparing for a Chocolate Fest happening the following day.

I enjoyed seeing her array of truffles and confections with interesting flavor combinations, and tasting her chocolate-covered Smokey Bacony Toffee, while there. Suzanne hopes to start making bean-to-bar chocolate(s) again in May (She's already made and sold some in the past). 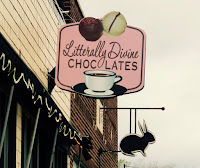 Other than the much larger Indianapolis-based company, Endangered Species Chocolate, I did not find anyone else making chocolate from scratch in the city besides Suzanne. Although, doubtless, some Indy-based aspiring chocolate maker(s) may be experimenting in their kitchen, this very minute.

There was a lot to like in Fountain Square, including a chance to try duckpin bowling and a cider and mead tasting flight at New Day Craft Mead and Cider. I left the latter feeling like these well-executed beverages that were full of well-balanced flavors would make excellent inclusions in chocolates. (And, in fact, Suzanne Litteral has done this before.) Brava. 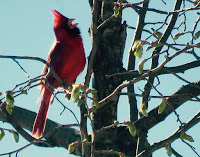 My apologies to all those who I did not reach while there. Two chocolate and/or candy shops were closed when I stopped by the cavernous City Market, filled with small jewels of every food type.

Indianapolis Airport
Before flying out, I found a few novelty Indiana-themed chocolates at the airport, including a DeBrand Milk Chocolate Race Car (think Indy 500 at the Indianapolis Motor Speedway). I skipped the small jars of "Cardinal Poop" (chocolate covered sunflower seeds with red shells).

I loved seeing the bright red Cardinal (Indiana State Bird) birds singing their hearts out in trees while in Indianapolis. We don't see those where I live.

*Chocolate Banquet readers will recognize a pattern here. We like exploring walks and trails that lead to chocolate as much as we like chocolate that will fuel good walks.

Posted by Corinne DeBra at 6:23 PM