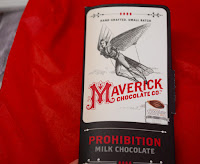 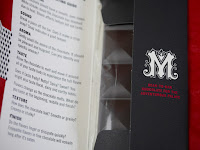 Maverick Chocolate Co. is a bean-to-bar chocolate maker based in Cincinatti, OH. 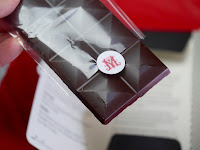 The chocolate had a pleasing sweet, light fruit and nutty aroma, and relatively creamy texture. The bar was well-tempered and contained a generous shake of smoked salt. The bourbon flavor was very light. (To be sold without restrictions, spirited chocolates need to contain less than a certain percent of alcohol.) 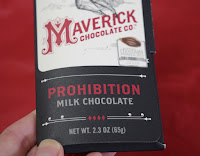 For 13 years, between 1920 and 1933, following passage of the Volstead Act in 1919, a nationwide constitutional ban on the importation, production, transportation and sale of alcoholic beverages was in effect across the U.S. This period has also been referred to as the Prohibition era or, more simply, as Prohibition.

Much earlier, in the 1790s, the U.S. Government levied a tax on spirits, which led to a "Whiskey Rebellion." Some makers moved west to the frontier in Kentucky. In Bourbon County, they found corn growing and water (rich in limestone, no iron) conditions were perfect for making what came to be known as Kentucky Bourbon. Prohibition resulted in the shut-down of Kentucky Bourbon and other distilleries; but operations resumed after the ban was repealed.

It is perhaps with the some of the same American spunk, persistence and maker spirit that craft adult beverage and chocolate making have seen a revival in recent times.