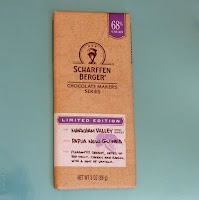 Today was Day #7 of Chocolate and Some Enchanted Islands Theme Week; and we're enjoying a second day in Papua New Guinea.

Cacao was introduced to islands in the South Pacific, directly and indirectly, by European explorers and those seeking claim new land areas, in part to grow crops, such as tobacco, sugar and cacao. 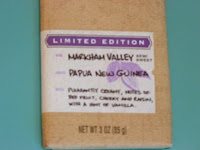 Fast forwarding a few centuries...There was a renewed interest in making bean-to-bar chocolate by small artisan makers in the Americas. Cacao was growing on many island nations (within 20 degrees of the Equator), making some interesting single origin bars possible. Scharffen Berger Chocolate Maker (founded in the San Francisco Bay Area in 1997) was an early entrant into this new market. 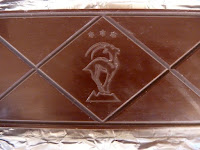 Later Scharffen Berger became part of Artisan Confections Company (Hershey). And, while the Bay Area Scharffen Berger factory (with excellent tour) closed, for awhile there was a small Scharffen Berger store in San Francisco's Ferry Building**—where I bought this bar a few years ago.

This bar from the past was stored in my chocolate vault until today. While plain dark bars (without flavor inclusions or preservatives) that are well-tempered can last up to two years, generally it's better to eat chocolate sooner rather than later.

This Scharffen Berger semisweet 68% cacao dark bar was part of a "Chocolate Maker's Series"—a Limited Edition bar. The cacao beans used to make it were from the Markham Valley in Papua New Guinea. The company also had a Vietnam single origin bar...where we'll be traveling to the day after tomorrow. (I'm not sure if either bar is still available.)

Tasting notes: "Pleasantly creamy, notes of red fruit, cherry and raisin, with a hint of vanilla." I would add that this bar had a rich chocolate (almost fudgey) flavor, not unlike yesterday's PNG bar. "Chocolatey" is one flavor that can be more pronounced in some beans/origins than others.

*My understanding is that crops grown in Papua New Guinea today include introduced crops such as cacao, palm oil, coffee, cassava and sweet potato, as well as traditional taro, banana, sago and yam.

**This retail location/store in the Ferry Building was later closed.

Posted by Corinne DeBra at 9:21 AM