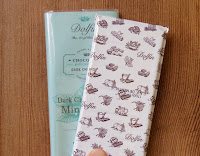 Goedemorgen and Bonjour. We're taking a virtual chocolate voyage to Europe this morning. 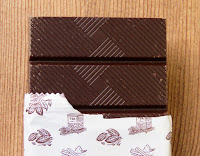 Belgian chocolate roots run deep
Chocolate fans in the U.S. can be forgiven for thinking that chocolate originated in Switzerland or Belgium.

Both countries played an important role in the rise of popularity of chocolate as we know it in the past century or two. Belgium's association with chocolate began almost four centuries ago, when the country was under Spanish occupation—after Spanish explorers brought cacao to Europe from the Americas, and were consuming chocolate in beverage form.

Eventually, chocolate dynasties and prestigious houses of chocolate arose, and many are still on the scene. Creamy chocolate pralines (bonbons) appeared in Belgium in the early 1900s and quickly spread elsewhere.

This well-packaged, made-in-Belgium chocolate bar was well-tempered and broke with a hard snap. It had a slightly natural, slightly artificial aroma of mint and was a balanced, relatively sweet I'm guessing 60% cacao chocolate. (The cacao percent of this blended-origin bar was not disclosed on the label.)

Posted by Corinne DeBra at 9:23 AM