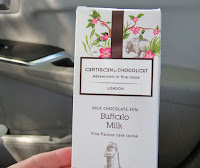 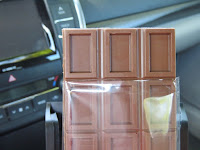 Welcome to Day #5 of Chocolate and Cowboy Theme Week.

Artisan du Chocolat - Buffalo Milk Chocolate Bar
People have been raising different breeds of cattle and cow for centuries. This includes buffalo cows and steers, long before dairy farmers and ranchers set up shop in the U.S.*

Today's milk chocolate bar was very creamy and sweet. It became slightly bendy when it got a bit warm in the car. But it held its shape nicely. (Avoid transporting chocolate in a warm car. Bars will go directly from a solid form to fondue in as little as a minute or two if exposed to direct sun through a window.)

Morsey's Farmhouse Kitchen and Creamery
Since I couldn't visit Laverstoke Farm in the U.K. mentioned above, I did the next best thing. I tried domesticated (water) buffalo milk. 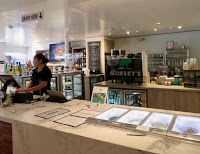 The first stop was to the family restaurant, which resulted in the purchase of a small hot chocolate, to go, made with buffalo milk. (Thank you to Morsey staff for taking time during the lunch rush to say hello and offering a sample spoon from a tiny cache of dark chocolate gelato that remained. Very tasty.) 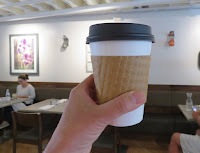 The underlying milk in the hot chocolate was quite good. (No gamey flavor in case you're wondering.) The added cocoa was quite light (likely alkalinized, to reduce acidity). There was a light layer of foam on top.

Morsey's Farmhouse Kitchen to go area offered buffalo milk gelatos (chocolate flavors were sold out) and chocolate desserts without buffalo milk, including two gluten free chocolate cakes. There will be return trips to try these in the future.

Morsey's (grass-fed) buffalo milk sampled at their Creamery came from buffalo cows pastured near Sacramento, CA. The milk was surprisingly good. It tasted very satisfying, and had a clean mouth feel and finish. It also was, we were told, higher in calcium and protein than traditional cow's milk.**

*In the U.S. we have bison (often referred to as buffalo), that used to roam the country in large herds  before European settlers arrived. However, while you may see bison meat in stores or in restaurants, it's unlikely you'll see bison dairy products or milk chocolate. (Undomesticated bison cows would not take kindly to your trying to milk them.)

**We were told that the A2 (beta casein) protein in this milk would be less likely to trigger milk protein allergies (than the mix of A1 and A2 proteins found in most cow's milk today).

A2 proteins tend to be higher in cows from Southern Europe. A1 protein levels tend to be higher in cows from Northern Europe. Beyond that, I suggest doing your own research. Lactose (milk sugar) would still be present in all cow milk(s) as far as I know. So, for those who rely on lactase (the enzyme that breaks down lactose that we humans produce less of over time), don't throw away your lactase pills quite yet.

Posted by Corinne DeBra at 8:17 PM