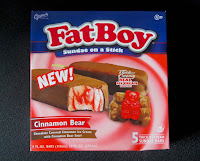 Welcome to Day #17 of Chocolate and Spice Theme Week.

We are nothing if not creative. Americans have found many ways to shove edible items onto a stick. This includes a wide range of tasty frozen dessert items.

Including cinnamon swirls named after gummy bears (think Red Hots* cinnamon candy, only softer) into a "fat" ice cream sundae on a stick bar was clever. (We may not have many bears left in the U.S., but we have herds of gummy bears and other animal-shaped treats.)