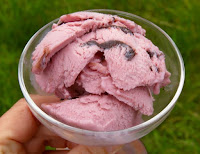 Welcome to Day #5 of Chocolate and Raspberry Theme Week.

Products with an ingredients list with longer than 5 items don't usually fare better than their simpler counterparts. For example, ice creams without vegetable gums taste better to us and seem to be easier to digest.

Today's low fat raspberry ice cream was created to respond to changing public tastes, and most of those changes seem to be for the better. In addition to being lower in fat and sugar and higher in protein, this ice cream was infused with natural tasting raspberry juice and flavor that seemed to be lacking in artificial flavoring or coloring.

A light fudge swirl added a touch of chocolate flavor and rich texture. It was incorporated into an ice cream base that had a very slightly granular texture (due to lower fat and a little extra (milk) protein (about 6.6 g. per serving or 20 g. per container).

The ice cream was also lighter in terms of sugar. It was sweetened with a combination of corn-based sweeteners and stevia.

The nutrition labeling was printed large enough to be read and understood. At 110 calories per 2/3 cup serving (approximately 1/3 the calories of many premium ice creams), consumers might be more tempted to each a whole pint vs. just one serving. But, then, that is an issue on the consumer side and not on the producer side.

*Breyers, a brand of frozen desserts/ice cream sold in the U.S. and Canada, was originally founded in 1866 by William A. Breyer, and later became part of Kraft, and then ice cream giant, Unilever.

Posted by Corinne DeBra at 8:26 AM