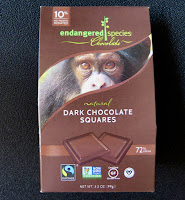 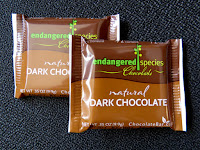 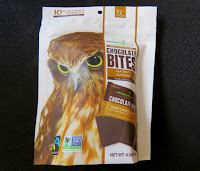 Welcome to Day #4 of Chocolate and Indiana Theme Week.

Today's individually-wrapped Natural Dark Chocolate and Dark Chocolate with Sea Salt and Almonds squares were both from Endangered Species Chocolate (Indiana, IN), and made with 72 percent cocoa dark chocolate.

The Indiana-based company features wildlife on their packaging (generally an animal or bird) that has been considered threatened or endangered. Endangered Species Chocolate dedicates 10 percent of proceeds toward species conservation, habitat protection and humanitarian efforts. They were also one of the first to adopt traceable, fair trade certification for their cacao.

The Chocolate Bites were made with the same dark 72 percent cocoa chocolate base and had added sea salt and bits of almonds. Having the same dark chocolate base and shape/thickness, they were very similar in texture and flavor; although the salt and tiny bits of almonds gave these squares a very slightly sweeter, nuttier flavor. And a well balanced light touch of sea salt rounded things out nicely.

This second chocolate featured an image of a small Southern Boobook owl that lives in the forests of Australia and Tasmania and, like most birds of prey, lives and nest in tall trees. So, forest conservation efforts are important to this bird's continued survival.