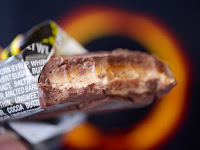 Welcome to Day #6 of LMNOPQR Theme Week. "Q" is for Quasar (more about that below). It also is the name of a candy bar from Trader Joe's (Monrovia, CA).

Quasars are, according to definitions I found: "massive celestial objects emitting exceptionally large amounts of energy, and typically having a star-like image in a telescope" and "it has been suggested that quasars contain massive black holes and may represent a stage in the evolution of some galaxies."

Yes, quasars are associated with enormous amounts of energy. On a smaller scale, today's Quasar candy bar supplied me with sugar, chocolate and energy in the form of calories. This bar contained approximately 220 calories, and a cosmically impressive 44 g. of Carbohydrates.

The Trader Joe's Quasar Bar contained "whipped chocolate nougat and rich caramel enrobed in dark chocolate." It was quite sweet, as one might expect. The caramel was satisfying without it being so gooey as to make a mess.

The milk chocolate and nougat were primarily about the sugar; so any chocolate flavor nuances were lost, in space. And speaking of space, the Quasar bar reminded me of another candy bar inspired by a heavenly body: The Milky Way.

Note: The Quasar bar is not gluten free. While it does not contain wheat (or may contain only trace amounts), malted barley is listed as an ingredient.

Posted by Corinne DeBra at 9:42 AM