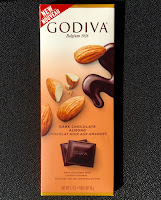 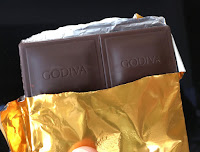 Welcome to Day #7 of Chocolate and Almonds Theme Week.

People often ask me if I eat the same chocolate twice. I've tried very hard not to; for example, I use spreadsheets to track and avoid duplicates.

This bar had a dark chocolatey, almost earthy brownie flavor that was also smooth and appealing. It didn't taste overly sweet, and that was great as far as I was concerned.

However, it appeared the Dark Chocolate Almond bar from Godiva might be similar to the Godiva 72% cacao bar with almonds I had years earlier, perhaps a re-packaged version, or perhaps with different cacao sources too.

Occasionally chocolate is re-introduced as new with different packaging or a slight tweak in ingredients. So, to be on the safe side, I chose a second chocolate today (below).

Godiva has been producing chocolate since 1926. Any business that's been around that long earns my respect. One can imagine the changes the owners have experienced over the past 90+ years.

One last observation about this bar... 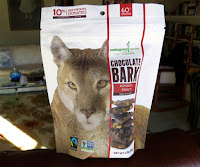 Reading labels is a hobby for me. I was interested to read on this Godiva bar packaging: "Partially produced by genetic engineering." This is one of the first times I've seen this.

I'm all for transparency, so I appreciated this heads up. Meanwhile, as I pondered this, our squirrel* chocolate thief, who loves chocolate with nuts, enjoyed a small piece of today's bar. It, apparently, could give a hoot about GMOs.

I've been featuring Endangered Species Chocolate bars for 10 years here on Chocolate Banquet. Each different bar has featured a new animal or bird that is under threat, and may need help. The picture of the chosen species is depicted on the packaging.

Today I'm trying the company's Chocolate Bark. This package of Almonds and Peanuts and Dark Chocolate featured endangered species (animal) was the Florida Panther (Puma concolor coryi). So, I was indulging for a cause. A percent of the proceeds go toward helping wildlife and habitats that support them.

Each piece of today's bittersweet 60% cacao chocolate bark was filled with bits and chunks of almond and peanuts—the latter providing a peanut brittle flavor note (although without all the sugar). The result was a very tasty combination that wasn't overly sweet.


*Note: squirrels (agouti, rats, woodpeckers and other critters) eat cacao in the wild, and are not afflicted with the same intolerance of theobromine as other animals, such as dogs and cats, other living things and some people (who lack the ability to process this chemical stimulant found in chocolate). I like chocolate, but I don't advocate feeding large quantities of chocolate to anyone.

As for the squirrel thieves, they've occasionally gotten into the house (when doors/windows were left open) and stolen chocolate, and they've broken into packages of chocolate left on my doorstep. At first I was annoyed, and worried it would kill the thieves; but the squirrels have suffered no ill effects. Their hardy constitution is perhaps one reason we don't see them on any Endangered Species chocolate wrappers.