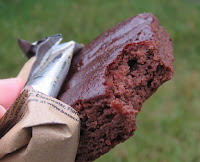 Welcome to Day #2 of Chocolate and Raspberry Theme Week.

This modern, paleo-friendly and gluten free take on a traditional brownie was made with honey, cashews (butter), coconut (oil and flour) and egg (in addition to cocoa and raspberry). This Kosher brownie contained no grains, wheat, dairy or soy.

It had authentic brownie and raspberry flavor and the texture was somewhere in between fudge brownie and chocolate cake. It was quite sweet, but enjoyable nonetheless.

This raspberry brownie also shows how far we have come in the gluten free baked goods category. Base Culture's single serving packaged baked goods (pumpkin bread, banana bread, almond butter and raspberry brownies) taste closer to the "real thing" and are healthier in many respects. For example, the list of ingredients* was simple and short, and there were not artificial flavors, colors or preservatives in this brownie.