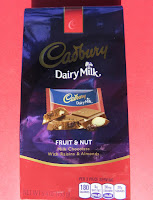 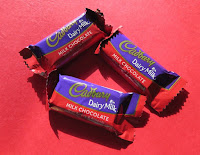 These chocolates were a variation on the classic Fruit and Nut milk chocolate bar that was first introduced in the 1926 as Cadbury's Fruit and Nut bar. (In 2003 the company added the "Dairy Milk" designation.)

It's hard to write about long-lived, large companies like Cadbury without delving into history. Like many purveyors of cocoa in the early 1800s, John Cadbury and his brother started with tea, coffee and drinking chocolate.

Cadbury announced their first milk chocolate bar in 1897 (one of the first in the U.K.) and the Dairy Milk chocolate brand followed in 1905.)

Interestingly, today's product was distributed in the U.S. by The Hershey Company (Hershey, PA), under license from Cadbury UK Ltd. Hershey founder, Milton S. Hershey, traveled to Europe and the U.K. and would have seen what the Cadburys were doing. Hershey's development of a "model town", and boys school in Hershey, PA was likely modeled, at least in part, after Cadbury worker housing and other community projects for less well-to-do citizens.

*Mondelez International (formerly known as Kraft/Kraft Foods) has owned the British confectionery company since 2010.
Posted by Corinne DeBra at 12:37 PM