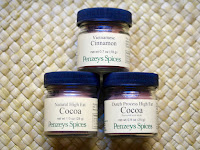 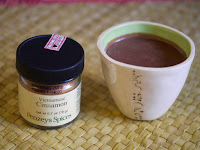 Welcome to the first day of Chocolate and Vietnam Theme Week.

The hunt was on this week for a drinking chocolate seasoned with flavorful Vietnamese cinnamon (Cassia). Having no luck finding this on a local menu, I decided to make my own. To obtain the cinnamon and chocolate, I visited Penzeys Spices in Menlo Park, CA. 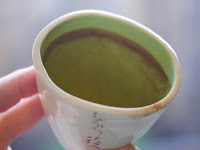 Penzeys Spices (Wauwatosa, WI), was founded in 1957, as a coffee and spice company, and has dozens of locations in the U.S. The local shop I visited carried five different cinnamons: four single origin cinnamons from different countries: Ceylon, Vietnam, Indonesia and China—and a fifth special Penzeys cinnamon blend.

The staff allowed customers to enjoy careful sniffing and appreciation of cinnamon samples. And after discussion of natural vs. dutched cocoa powders, two jars of chocolate and one small jar of Vietnamese Cinnamon - Extra Fancy were procured.

In truth, the Vietnamese Cinnamon made the "true" (Ceylon) cinnamon smell mild-mannered by comparison.* (The Vietnamese cinnamon reminded me more of intense red hot cinnamon candies of childhood vs. a blander apple pie.) But, there are those who swear only by the true cinnamon. (Later in the year I'll feature a chocolate and spice week and we can continue this discussion.)

As stated on Penzeys Spices website: "Vietnamese Cinnamon is the strongest, richest, and sweetest cinnamon around."

Now, on to the two cocoa powders—Penzeys Natural and Dutch Process (Alkalinized) High Fat Cocoas are both possible drinking chocolates. Both were heated with milk and spiced with Vietnamese Cinnamon, with a very light touch of coconut palm sugar.

Separately, the Natural Cocoa had a fainter aroma, but a more powerful (slightly richer, more acidic flavor). The Dutch Process Cocoa had a wonderful fudge brownie aroma, and a slightly milder flavor. I blended the two, and split the difference.

The cocoa blend with Vietnamese Cinnamon was heated with milk and a touch of coconut palm syrup with vanilla. The cinnamon added rich spicy warmth without being overpowering.

Nice flavors. However, I might strain this concentrated drinking chocolate in the future (or stir it longer over slightly higher heat), as the leftover residue on the cups was fairly considerable. My fault here.

*I will feature Penzeys hot chocolate cocoa powder with Ceylon cinnamon in the future.