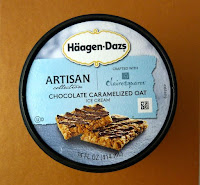 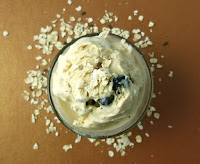 Today was Day #6 of Chocolate, Grains and Grasses Theme Week. Although this week could just as well be called "Chocolate and Fattening Up for Winter Theme Week." Cakes, cookies, ice cream. Sounds fun, but I try to enjoy small tastes of these items when possible.

Today's Chocolate Caramelized Oat ice cream was from Haagen-Dazs (Oakland, CA/Minneapolis, MN*). This flavor was part of the Haagen-Dazs Artisan Collection, and contained pieces of chocolate oat treats from local Bay Area chocolatier—Claire Keane, founder of Clairesquares, based in San Francisco, CA. Claire's recipes are based on her Irish heritage. Go Claire!

The caramel ice cream was creamy and flavorful; and the chocolate pieces were crunchy and satisfying with hints of caramel and oat. Nice combination.

*Haagen-Dazs is an ice cream with a complex history that exemplifies our rapidly evolving world. Once upon a time, back in 1961, in the Bronx (New York, NY), a couple invented the Haagen-Dazs name, and opened their first ice cream store in Brooklyn, NY. Later this brand became part of Pillsbury (1983). General Mills bought Pillsbury in 2001, and still owns the brand, but licenses it to Nestle. Dreyer's is a Nestle subsidiary based in Oakland, CA, that makes this and other ice creams. The End...for now.