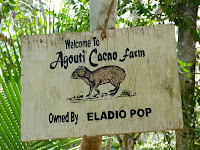 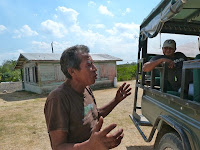 It was impossible to travel to Belize this past week without wanting to learn more about the Maya and native peoples who have used cacao for centuries. 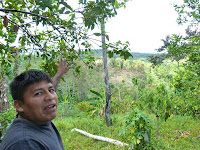 I was fortunate to have visited Agouti* Cacao Farm in San Pedro de Colombia Village (in the Toledo District of Southern Belize, within sight of the historic Mayan site of Lubaantun). This tour was arranged through Belcampo Lodge in Punta Gorda, Belize). 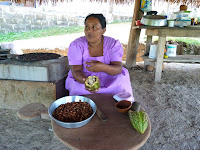 It was wonderful to be able to walk through cacao and fruit trees and see corn drying, with Feliciano Pop; and to receive a traditional chocolate making demonstration from Adalia. Both Feliciano and Adalia are children of Mayan farmer, Eladio Pop, who was featured in the 2011 documentary "The Chocolate Farmer" directed by Rohan Fernando.) I also spoke briefly to Eladio Pop, who was delightful, wise, and very busy with his work.

*Agouti (a large, brown rodent, similar to a rabbit, but with tiny ears), a type of woodpecker, and squirrels are some of the small animals that might nibble on cacao pods (fruit) growing on the cacao trees. Feliciano also mentioned he had seen a gray fox sniffing about the pile of dried corn, which I was delighted to hear -- having spotted gray foxes in the San Francisco Baylands near where I live. (However, no record of fox liking cacao that I know of.) 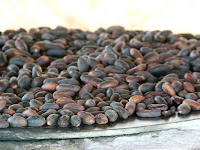 Adalia roasted (unfermented) cacao beans (and allspice) on a traditional comal (hot surface over a fire), and then winnowed the roasted beans using a woven basket -- allowing the wind to carry away the lighter, chaff-like shells/skins from the beans. The fire-roasting resulting in a very faint smoky aroma in the resulting cocoa paste (stoneground by hand). 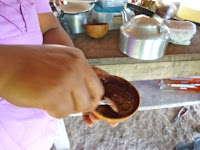 The resulting drinking chocolate was lightly sweetened with honey and a little water, stirred, and served in half gourd shells. Adalia told us that older women in the village make the chocolate for weddings. 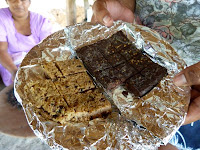 Adalia also served us homemade sweets -- cocoa paste that was combined with sesame seeds and pressed and cut into squares. Adalia also made a coconut tart, that was made with pressed, shredded coconut (perhaps sweetened with honey), cocoa nibs and a bit of shredded ginger. These chocolate/sweet items were wrapped in foil and would be good for a few days.

We later enjoyed combining the chocolate and coconut flavors together; the darker cocoa balancing out the sweeter coconut.

Thank you for the Agouti Cacao Farm and family, and for all those at Belcampo (and at the airport) for chocolate tasting help! 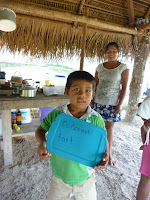 Today was Day #7 of Chocolate and Latin America Theme Week.

Posted by Corinne DeBra at 5:40 PM