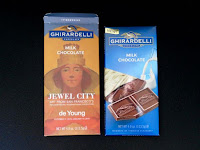 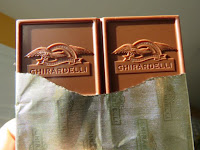 Welcome to the first day of Chocolate and California Dreaming Theme Week. First a bit of chocolate history about the Golden State, since we'll be virtually visiting here for the next several days.

The Gold Rush and the promise of new opportunities and dreams, drew many people to San Francisco in 1849. One individual, who arrived via South America, was Domenico (Domingo) Ghirardelli.

Ghirardelli first offered chocolate to miners in the Stockton, CA, area, and later opened a second shop in San Francisco. The Ghirardelli Chocolate Company was incorporated in 1852, making it one of the oldest chocolate companies operating in the U.S.

Later, Ghirardelli's three sons managed the growing operation in a new San Francisco location. And, after successfully weathering the 1906 earthquake, participated in the Panama Pacific International Exposition*, which attracted visitors from around the globe. (Source of stamp shown: Pinterest.)

Ghirardelli California headquarters may now be across the Bay in San Leandro, and they're owned by a Swiss company (Lindt); but their heart and history is still in San Francisco.

The chocolate was sweet, and uniformly even in flavor. The texture was creamy smooth.

*The cover of today's "Jewel City" milk chocolate bar was adorned with an image from an Arthur Mathews oil painting, titled "The Victory of Culture over Force (Victorious Spirit), 1914. This bar (and art) were part of a centennial celebration and art exhibit in San Francisco that commemorated the 1915 Exposition in 2015-2016. One of the major attractions at the historic expo was a Tower of Jewels that was illuminated at night—thus the nick-name Jewel City.

Posted by Corinne DeBra at 9:35 AM