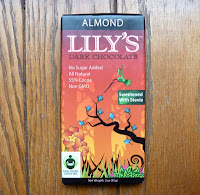 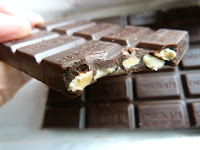 This dark 55% cocoa, non GMO bar with Almonds, from Lily's Sweets (Santa Barbara, CA), was sweetened with stevia rather than with added sugar. Stevia (stevia rebaudiana) is a plant with naturally sweet leaves, a member of the very large sunflower family, that has been used as a sweetener for many years. 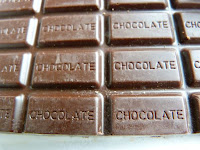 As with a previous Lily's (stevia) bar I tried, I found this chocolate to be smooth and dark and because of the stevia, and perhaps the inulin, less likely to give me a sugar rush than other bars. Although stevia is sweeter tasting by weight with fewer calories, some claim it has less of an impact in blood glucose than refined sugar.

Attractively packaged, with colorful art on the label, this bar was also scored into smaller sections, making it easier to split with friends or family. 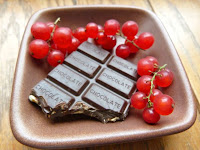 I enjoyed part of this Lily's Dark Chocolate Almond bar with another interesting plant -- some tiny bunches of fresh, beautiful ruby red currants. Bright red berries of different sorts are a small consolation in winter. We don't see fresh currants that often in the U.S.

Apparently this fruit, and other members of the gooseberry family, were banned some years back to help protect against the spread of a rust infestation that was affecting pine trees. Currants could act as a host or non-symptomatic carrier of the disease, so their cultivation was discouraged and native currant plants eradicated in some areas. Here's to hoping we might see them grown again one day soon.
Posted by Corinne DeBra at 9:21 PM