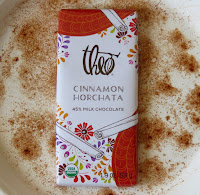 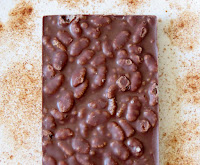 And, instead of rice milk, which I associate with American horchata beverages, the "rice" came from crispy brown rice embedded in this bar, giving is some crunchy texture as well.

*Horchata is a light-colored, opaque, grain or rice-based beverage, flavored with cinnamon from Latin America.

Horchata's origins stretch back to North Africa (when the beverage was often made from soaked tiger nuts) and Spain, and the idea was likely brought to Mexico and Central America).

Horchata (origin likely from a word for barley) refers to a larger class of plant- and grain-based beverages from the Mediterranean. Ingredients for these beverages may include ground almonds, rice, barley, sesame or tiger nuts.

Posted by Corinne DeBra at 9:16 AM