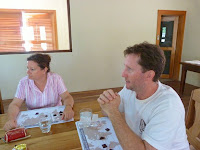 Being present at the start of something great is always a pleasure. And, today I had the great pleasure of witnessing the creation of a new production cycle (Batch #1) of chocolate being made, with new equipment at a new facility, at Belcampo Lodge and Farm (Punta Gorda, Belize). 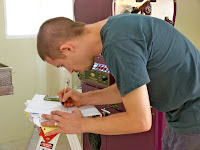 Belcampo's Belize location (showcasing chocolate, rum and coffee production, with a focus on agricultural tourism) is situated in the Toledo District of Southern Belize. Toledo is to chocolate in Belize what Napa is to wine in California. 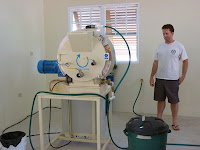 Following a short workshop and comparative tasting in the "chocolate building", cacao beans were carefully measured and poured into a roaster. Roasting times and temperatures were carefully graphed and recorded, so that optimal results could be duplicated later.

A very impressive and efficient winnowing machine got rid of the thin membrane covering the cocoa beans after roasting. (And leftover shells were ejected into a bag, ready to use as compost in the garden.)

Next, cocoa nibs were weighed and loaded into a larger machine that would grind the bean pieces into an aromatic cocoa paste, that would eventually become dark flowing, molten chocolate. 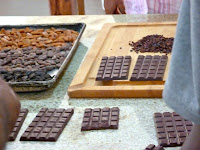 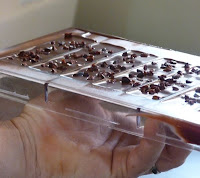 The last, and not the least, step: chocolate was put in a liquid-cooled/heated tempering machine, where it would be heated and cooled to just the right temperature to form crystals that would lock into place. All the while, humidity levels and room and water (surrounding machine) temperatures need to be monitored carefully.

When done correctly, a good temper yields chocolate bars that are solid and break with an audible snap. (Easier said than done; tempering can require some patience.)

Eventually lovely rich tasting dark chocolate bars emerged, some with fresh cacao nibs, putting chocolate on the map for Belcampo. Thank you to Seneca, Mara, Kelly, Maynard and many others who made tasting these bars possible.


Stay tuned for pictures and more details this coming week.

Note: Posts and Pictures will be delayed this week due to travel.

Posted by Corinne DeBra at 8:37 PM

Email ThisBlogThis!Share to TwitterShare to FacebookShare to Pinterest
Labels: Belcampo, chocolate and Belize