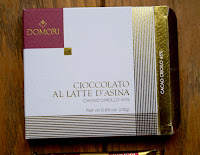 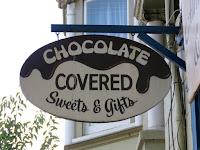 Welcome to Day #2 of And Now for Something Completely Different* Theme Week. 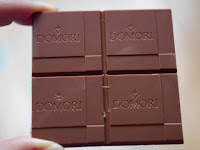 What do Pliny the Elder, Hippocrates, Cleopatra and Pope Francis have in common?

They've all either expounded on the benefits of, or experienced benefits first-hand from, donkey's milk. Cleopatra took baths in donkey's milk which was/is said to benefit the skin. And Pope Francis apparently was fed a supplement made with donkey's milk when he was an infant.

Well, it's not everyday that you get to try a milk chocolate bar made with donkey's milk. And, where did I find such an odd treasure? At Chocolate Covered (San Francisco, CA) of course. This tiny shop is one of a few places in the Bay Area to carry unusual, high-quality chocolate items that also taste good. 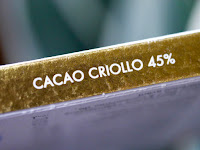 This 45 percent bar was quite sweet; but even so, the initial aroma and flavor contained something unique, but it was hard to characterize. I expected a slightly gamey flavor, but that wasn't it.

However, after the first few nibbles, the unidentified flavor softened and brightened to a slightly fruity, rich caramel, and continued to yield interesting caramel and dulce de leche notes—due in part to high-quality Criollo cacao. The bar had a creamy melt and texture, and was well balanced and tempered for a milk bar. The finish tailed off gently and left no real aftertaste.

*For those old enough to remember, the phrase "And now for something completely different" was sometimes uttered by narrator John Cleese, one of several comic performers, who appeared on the British television show "Monty Python's Flying Circus"—as an interlude between bizarre and outrageous skits or stories.